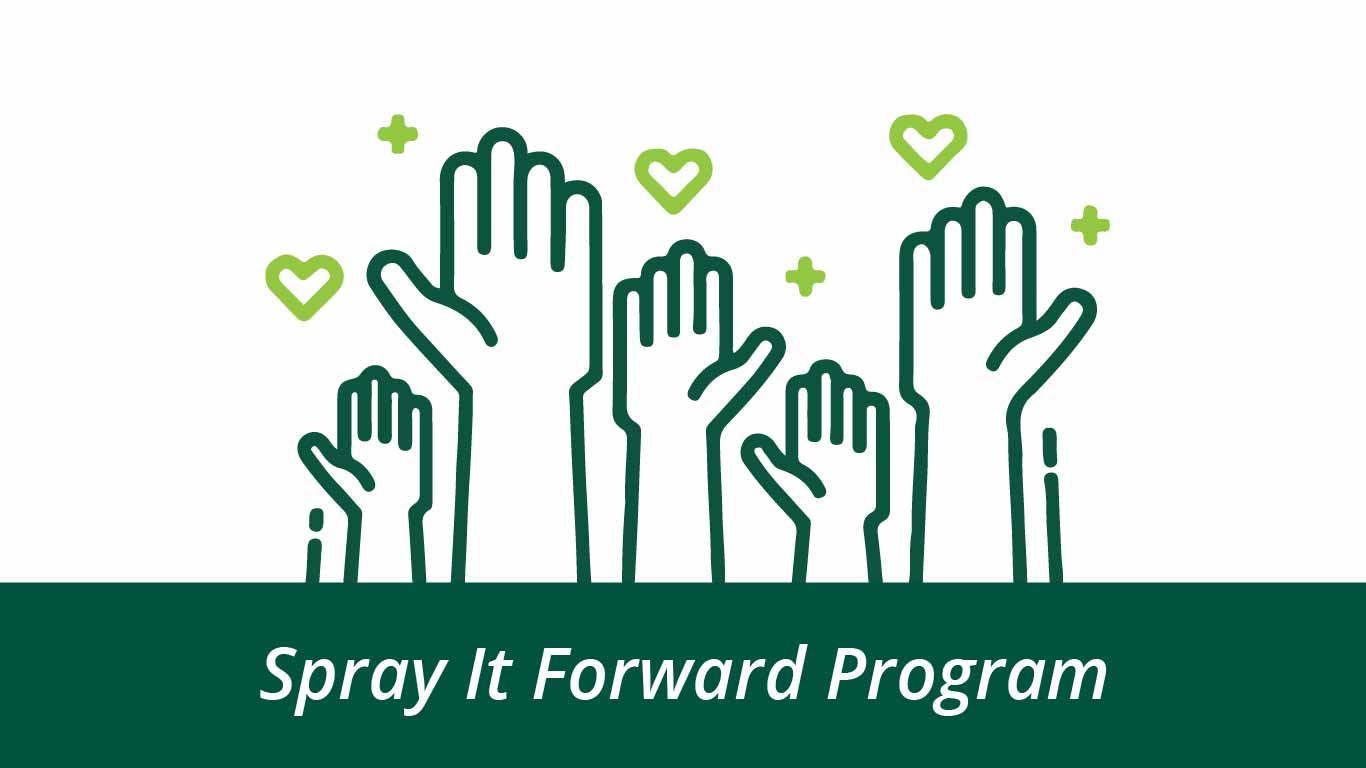 At All Terrain, one of our four values is to give back and we do, we give back 3% of our top-line revenue to a number of nonprofits in the area. One of the additional ways we give back is through our Spray It Forward Program.

What is our Spray it Forward Program?

It is a program where All Terrain gives back to its community members. This program is customer-oriented, so any of our active customers are able to nominate someone they know in the FM area to receive a lawn care service at no charge. No, it doesn’t have to be our spray weed control – fertilizer treatment. It can be a spring/fall cleanup, mowing, tree pruning, etc. You get where this is going. It can be any of the services we provide, minus snow removal.

We know that being able to pass it on to someone, or being passed on to, can be a great feeling. Whether someone ahead of you in the drive-thru lane paid for your drink. Nice! Or you see someone trying to jump-start their car, and you help them out. Awesome! One of our values is to give back. We’ve been blessed and we want to be a blessing to others. If there’s someone who you believe is deserving of a little help or cheer, let us know how we can give back.

There were 2 nominations that stuck out to us of the many nominations we received. Let us give a quick summary of them both.

The first was a woman in the area who had recently lost her husband. Her husband was well-liked by many people and had musical gifts which he shared with his local church. He was someone who was very involved with the community, as well as someone who would take the time and take care of his home. This family has a large rural home that any outdoor home task is massive for a person to do themselves, especially if it’s not something they’re familiar with doing. They were  nominated by a friend to receive a spring cleanup.

The second nomination was for a young woman who had lost her husband to a brain tumor.  She continues to take care of her family and now raises funds so other families might be able to avoid what they have had to endure. This family was nominated to receive weekly mowing and trimming for the season.

Though it may seem like small task to some, we do what we can in an effort to take at least one thing off these family’s plates. It’s nice to be able to make a difference or to be a helping hand.

If you’re wanting to spray it forward – you can nominate somebody you know in the FM area to receive a lawn care service at no charge, and help us spread a little extra cheer through our program. We try to honor as many requests as possible, it may be difficult based on the volume of requests and time of the season. Nominations must be from current, active customers for the nomination to be considered. This is a year-round program.